U.S. is seeing an ‘unprecedented focus’ on environmental justice, says Amir Jina, a founding member of the Lab
Read Q&A
This past winter, University of Chicago economist Amir Jina had to flip his climate policy class “on its head.” The election of President Joe Biden suddenly brought the United States toward environmental optimism—a shift that energized Jina’s students.

An environmental and development economist at Harris Public Policy, Jina stresses that the next decade could be our last chance to prevent the worse outcomes of climate change, making the Biden administration’s priorities all the more important. Earlier this year, he authored a chapter on climate change and the U.S. economic future, part of a new policy roadmap released by the Energy Policy Institute at UChicago.

Jina, whose research focuses on how environmental changes shapes societies, is also a founding member of the Climate Impact Lab—an interdisciplinary collaboration examining the global socioeconomic impacts of a warming planet. In the following Q&A, he discusses the challenges ahead for the climate, the importance of having a variety of experts in policymaking, and much more.

The Climate Impact Lab measures the real-world costs of climate change, leveraging a first-of-its-kind, evidence-based, data-driven approach. During the previous presidential administration in the United States, the members of the Lab began working on research that could inform what an administration that cared deeply about environmental policy would need to focus on, and what tools they would need to advance progress. Our efforts ended up being even more timely than we anticipated due to the moment we find ourselves in now, and the specific administration that got elected.

We’re now working hard to ensure that several important pieces of analyses, recommendations and new tools from the Lab will be public in the coming months. These include estimates of local and global economic impacts of climate change on health, labor productivity, energy use, and agriculture. And perhaps most importantly from the point of view of a policymaker, a way to aggregate all impacts and arrive at a social cost of carbon.

How has the Biden administration changed your teaching?

I taught a class in Winter Quarter, “International Climate Policy,” that was flipped on its head as a result of the new administration. From the pessimistic view of international climate talks of the last few years, we’re in a world of optimism now, and I tried to bring these major developments into class earlier in the quarter. We were able to focus dialogue around real-time developments such as the flurry of executive orders and major personnel appointments that arrived in the first few weeks of class. The students seemed to appreciate and be energized by the shift in real time.

How optimistic are you about the new administration’s approach to climate policy?

If the Biden administration is serious about playing a true leadership role with the Paris Climate Accords, and about John Kerry’s role as United States Special Presidential Envoy for Climate, we could find a very different state of play in the world.

There has been an expansion of climate policy, to the point where it has become a central pillar of the new administration’s work. Following through on the early promise will be difficult, but all signs point towards an administration (and a whole community of researchers) ready and eager to do the hard work. The appointments of John Kerry and Gina McCarthy, both reporting to the president directly, shows a very novel approach to climate work.

I don’t think climate change has been elevated to this level of importance before in the United States. There’s also a qualitative change in how the issue is being thought about. There’s been an unprecedented focus on environmental justice, climate justice, and ethics, and a recognition that the impact of climate degradation falls disproportionately on minorities and less affluent communities both here in the U.S. and around the world.

While there’s demand for pure economic expertise, the space has widened to include many other points of view, which is actually a positive. Despite sometimes calling myself an economist, I believe that economists tend to dominate policy more than they should in this area. New points of view will ensure that policy analysis won’t be so narrowly focused. For example, economic cost-benefit analyses might broaden to start including the risks people face or the inequality in who experiences both the costs and the benefits of a policy rather than favoring the polluters as is often the case. 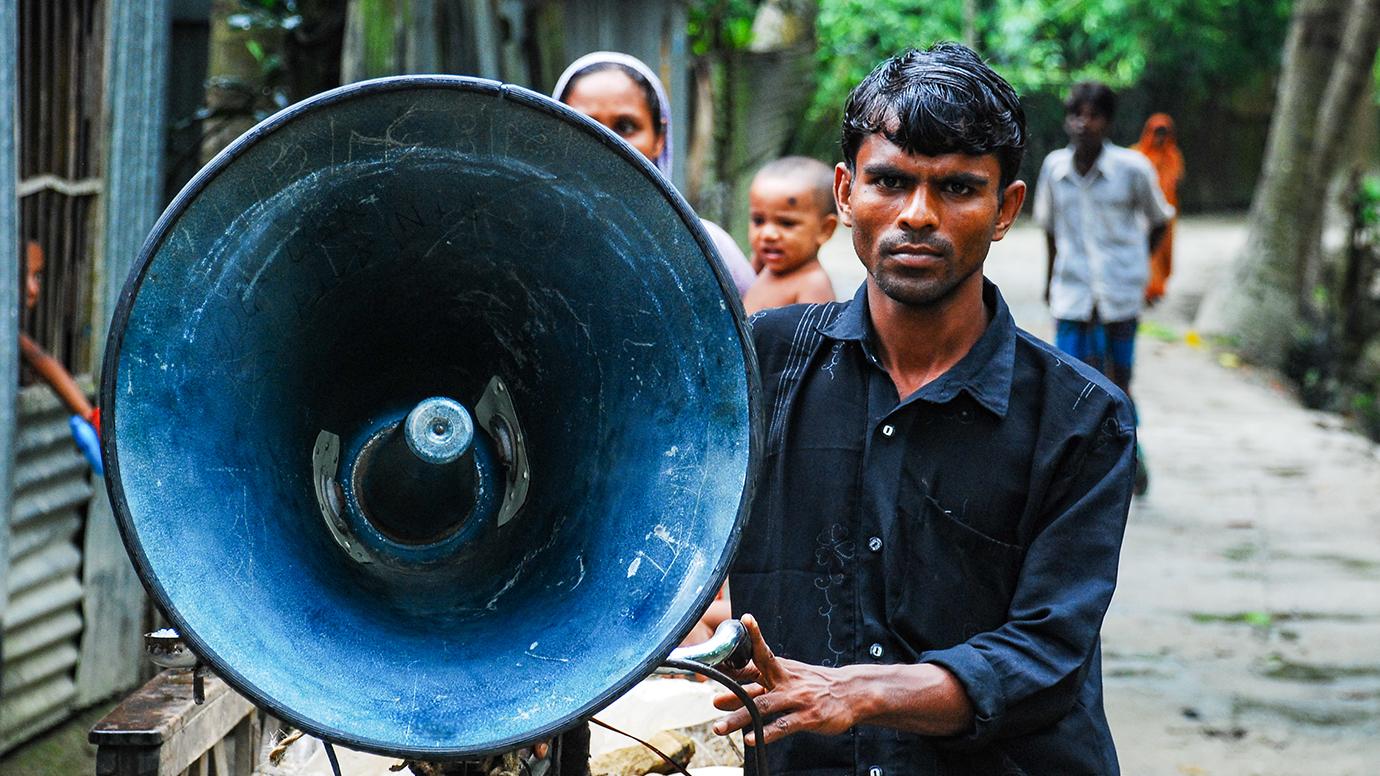 A portable megaphone in rural Bangladesh, previously used for advertising merchants, has been retooled to provide disaster warnings in communities with low access to information. Early warning systems offer a vital way to adapt to the negative effects of disasters. Photo by Amir Jina

What should we be looking for in the coming months to assess how much the new administration is prioritizing these issues?

Very shortly, the United States will announce its intended carbon emission reductions under the Paris Climate Accords, which we have just rejoined. A rhetorical success would be an ambitious commitment to cut emissions, signifying the United States’ status as a world leader, and acknowledging that most of the historical emissions have come from the United States.

The best thing, of course, would be for President Biden to go further than rhetorical commitments and present a big centerpiece domestic policy, which would of course become legally binding if it were to become law. The work on the social cost of carbon, which the Climate Impact Lab is working on as well, is critical—but there’s so much more to do that a major piece of legislation could help to drive.

The United States is a major polluter, and it needs to set up a process where science is the backbone of all decision-making in this field. We need a policy that takes into account equity and impact on disadvantaged communities. And we need to set up a clear process so that we can understand how the science affects policy, and understand clearly when politics or partisan considerations are taking policy in a different direction from what the science tells us we ought to do. There are times that other concerns may override the science, but we should at least have a clear understanding that we are acting counter to science in those situations.

What else should we know?

There’s a lot of work to do, and this is the last decade we have to really turn things around with respect to the climate. My collaborators and I have a lot of papers in the works about the distributional effects of climate impacts. And there’s a large research community waiting—in the same way that researchers stepped up during COVID-19 to tackle a major societal upheaval, there’s a similar sleeping giant of climate researchers across many disciplines who’ve put in the work and are ready to help put that work into action.

—A version of this story was first published by the Harris School of Public Policy.